The 1950'ties was a great decade in the history of the 6-Days with a richness of stars and personalities on the tracks all over Europe with riders like Rik van Steenbergen, Achille Bruneel, Gerrit Schulte, Reg. Arnold, Lucien Gillen, Milo Carrara, Jean Roth etc. etc.


Not very many of them are still among us, a couple of weeks ago died the greatest Danish star from that period, Kay Werner Nielsen, in the age of 92, and now we hear from Italy that the fabulous Ferdinando Terruzzi has passed away, just some months after his 90 years birthday.


From Milan in south and to Copenhagen in north he brought the crowds in ecstasies as a real artist and showman on the bike. Fast, clever, lucid - but also a damned good rider!


As an amateur he was one of Italy's best sprinters - but not good enough to be selected as a sprinter for the Olympic Games in London 1948. But he got a place on the Italian tandem and with partner Perona he created the great sensation by taking Olympic gold medals, beating home-favorites Harris - Bannister in the final.


Then he turned professional and from 1949 to 1965 he participated in 121 6-Days, winning a total of 23. His first partner was his sly countryman Severino Rigoni, who taught him all the tricks, but his most famous mates were Lucien Gillen from Luxembourg and Reg. Arnold from Australia. On the famous Velodrome d'Hiver in Paris he won respect when he in 1952 in this, the hardest 6-Days of that time, brought "il campionissimo" Fausto Coppi to a decent 4th place overall. Years later, in the last two 6-Days on Vel d'Hiv in 1957 and 1958 he steered French road-cracks Jacques Anquetil and André Darrigade to victory.


A special evening on the velodrome in Forum Copenhagen was the 21st of January 1960. A 100 Km Madison was on the program, and it was won by the team Ferdinando Terruzzi - Reginald Arnold, both 36 years of age. The time recorded for the 100 Km was incredible 1 hour 52 Min. 13 Sec., average-speed of 53,457 Km! A record, which has to our knowledge never ever been beaten.


Nando Terruzzi has retired forever, but his name still recalls a full of nice stories from one of the great eras of track-cycling. 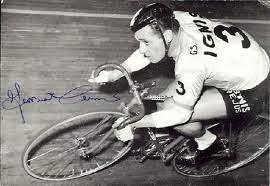 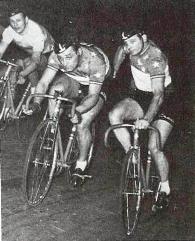 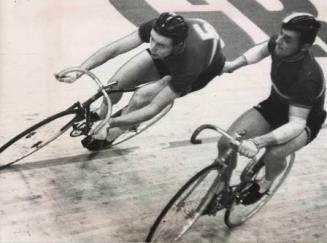