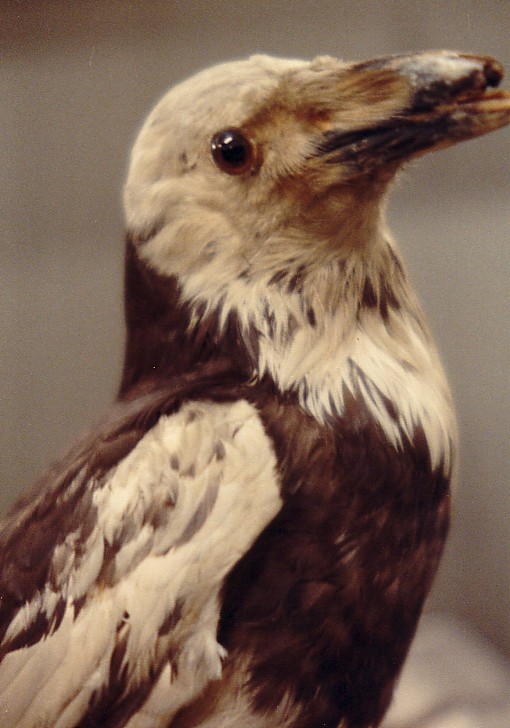 Pied Raven, which previously lived in the Faroe Islands and Iceland.
The last living species were shot in 1902.
This one is photographed at the Zoo Museum, Copenhagen, May 1986.
Photo: CykelKurt


Consider this as a tribute to a beautiful bird made extinct by man in his inscrutable wisdom. The following article by Danish ornithologist and scientist Finn Salomonsen was written way back in 1935, as he travelled the Faroe Islands.
Copenhagen, January 1988
Kurt Starlit 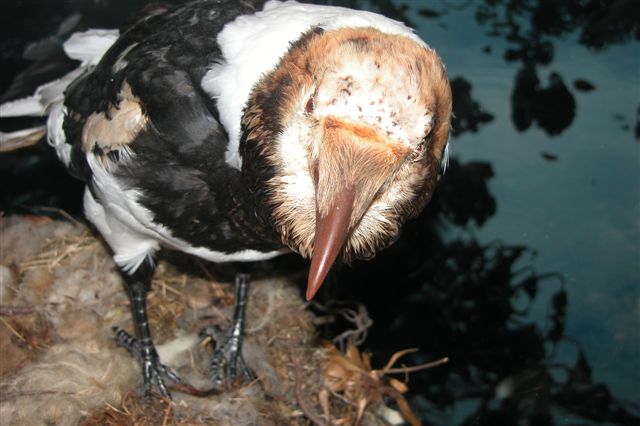 
Ascanius (1767, Danish edition, p.45 and poster VIII) provides the best and most detailed description, which is available of the white-speckled raven from the Faroe Islands, based partly on a number of stuffed and live birds, partly in correspondence with Faroese inhabitants. He calls it "Corvus variegatus Færøensis", thereby ignoring the name it was given three years earlier by Brünnich (Corvus corax varius var. leucophaeus). Later, the white-speckled mutant was named "Corvus leucophaeus" by Vieillot in 1817 and "Corvus leucomelas" by Wagler in 1827.


Morphological remarks
The raven on the Faroe Islands previously consisted of two forms, the normal black (C.c. varius) species, which was the most common of the two, and furthermore a white-speckled mutant, usually incorrectly designated as Corvus corax varius var. leucophaeus (Vieillot); the latter is now extinct, the last observation being made 1902.


The Faroe raven, Corvus corax varius (Brünnich) looks much like the nominate form Corvus corax corax (Linneaus), though generally speaking it is more dull colourated: not so shiny violet-blue on throat and back, and more dark green-blackish underneath. The sub-plumage - especially on the neck - is usually white, not grey as is the case with C.c. corax; proportions are like common raven, as shown in the following wing-measurements of fully grown Nordic ravens.

Icelandic ravens usually have the same colouration as the Greenlandics meaning, that they cannot be destinguished from each other - C.c.islandicus (Hantsch) is identical to C.c. varius. The apparantly difference in size between islandicus and varius is due to the inadequate number of specimen available.


Hartert (1910) measures the Faroese birds to max. 440 mm, which is the same as the Icelandics. The Greenlandic birds, which should be categorized as Corvus corax principalis (Ridgway), are generally larger, but do not differ in coloration from C.c.corax.


All these forms, however, are closely related.


It was mentioned by most authors, who described the Faroese bird life (Claussøn, Tarnovius, Debes, Resen, Brünnich and Svabo). It had its own Faroese name (Hvitravnur) and besides it was an appreciated curiosity at many European museums.


The bird was rather numerous in the Faroe Islands up until the beginning of the 19th century. Graba was observing more than 10 specimen in 1828, describing it as a rather common bird (Graba 1830, p.51).


Twenty years later Holm (1848, p.478) reports the bird has declined, and from middle of 19th century there is a substantial decline of white-speckled ravens.


The reason for its disappearance was a merciless persecution from man; birds were sent to Copenhagen in large numbers as a curiosity (Ascanius 1767, p.45; Holm 1848, p.478). Furthermore, the bird was bullied by crows and other birds, and - strangely enough - by black ravens (Ascanius 1767, p.45; Graba 1830, p.51; Holm 1848, p.478). Finally, its hereditary traits (genes) were recessive, so for this reason alone it could never become particularly numerous.


The white-speckled raven was not a simple albino form!


Firstly, it was known as a species of its own, having its own name, which was not the case with albinos occasionally appearing among other Faroese birds. Secondly, the plumage colour was fairly uniform in all white-speckled ravens, it was no coincidence which parts of the bird was black and which was white. This is demonstrated by many drawings and descriptions dating back to Worms and continuing up to the latest descriptions.


Completely white ravens, allegedly occurring in the Faroe Islands (Debes 1673, p.124), must either have been exceptions or maybe "real" albinos. All other authors talk about white-speckled ravens, for example Tarnovius (a contemporary to Debes) in 1669 is stating that...."white ravens not being completely white, but speckled with black feathers."


Claussøn (1632, p.152) calls them "brogede Rafne" (speckled ravens) (Resen 1688, vol.III, p.455) "bunte ravens" (pied ravens) like Ascanius, who probably has studied the largest number of white-speckled ravens, explicitly points out that there is no completely white ravens in the Faroe Islands.


Ascanius (1767), who received a large number of living as well as stuffed birds sent to Copenhagen, as well as Graba (1830) and Holm (1848), both of which have shot some specimen in the Faroe Islands, describe them as white-speckled ravens.


All descriptions are identical and the authors themselves stress that all individuals appears fairly uniform.


The same result appears from the descriptions sent to various European museums, as well as Hartert and Kleinschmidt who came to the same conclusion (1901, p.44).


I examined one specimen myself at the London Museum, four specimen at the Zoological Museum of Copenhagen, and came to the same conclusion.


White head, rather sharply defined against a solid black or light brown-green back. White throat, transforming irregularly along the chest into a black band of varying width. White belly, however, in a small number only the middle part is white. Lesser coverts black, often with a few white feathers among. Primaries and secondaries white, wing coverts irregularly variegated, rarely quite white. Of the tail feathers, the middle pair usually are the brightest: white or white-speckled - likewise the rest, which can also be provided with a little bit of white. Only occasionally more than a few tail-feathers are white.

Such a remarkable bird naturally attracted interest. And thanks to this interest, we have found a number of interbreeding results between black and pied ravens. In this way, it was possible to detect their mutual characteristics. In the literature we find 11 incidents of interbreeding the two forms over a period of hundred years. This is quite a large number, when taking into consideration that we are talking of an extinct bird.


According to these descriptions, the Faroese white-speckled shall be considered as a mutant from the common Faroese raven, Corvus Corax varius.


Interbreeding
The decolouration is caused by a single gene which is recessive. This is in accordance with the general rules of albinistic mutation (Wriedt 1923, p.77). The heredity have two options, even though heterozygous specimen always become black, as can be expected from recessive mutation.


First generation (F1) exhibit simple Mendelian segregation. It can be disregarded whether homozygous individuals are lethal or sublethal, as the number of chicks by interbreeding usually is 4-5, which is also common among "normal" couples.


Below is shown examples of interbreeding, as indicated in the literature, and all of which support the above mentioned view. The gene of the white-speckled character is called "a". For this reason, white-speckled ravens has got the genes "aa". Black homozygous are called "AA" and heterozygous (also black) is called "Aa."


The following types of interbreeding are described in the literature:

The following examples were found:


10.
One particular couple, both of whom were black, previously got one or two white-speckled chicks.
In recent years, all chicks were black.
(Müller 1862, p.10); type II

When a white-speckled interbreeds with a black, all the chicks usually turns out black (example 4, 5 and 11). This is because the chance of a white-speckled (aa) crossed with a homozygous black (AA) predominates, since the latter is likely to be more numerous than the heterozygote (Aa).


When two black heterozygotes are crossed, 1/4 of the offspring will be white. As seen from examples 1, 2, 3, 7, 9 and 10, the offspring are usually white - though some years all chicks are black (ex. 10). A few breeding pairs get two white-speckled chicks together with the blacks.As the number of eggs are usually 5, the number of white-speckled chicks corresponds quite well, with an average of 1/4 thereof.


When a black heterozygous is interbred with a white-speckled specimen, the result is an average of 2 white-speckled chicks (ex. 4, 6 and 8). With such a small number as five youngsters, one cannot expect a more specific segregation.


White or white-speckled ravens were previously considered to be widespread far beyond the borders of the Faroe Islands. For example, they seem to have been quite common on Iceland, where also Corvus corax varius breeds. Already in 1555 Olaus Magnus reports white-speckled ravens on Iceland (Magnus 1555 Liber XIX, p.117 in 1909 series), as do Ditmar Blefken in 1607 (Hantsch 1905, p.5) and Thormodus Torfæus (1715, p. 86).


Anything conclusive about the origin of Icelandic white ravens cannot be decided. Possibly it may be the same type of individual variation, known from the Faroese mutant, but there is no detailed description from that time. One gets the impression that the records are strange exceptions, rather than descriptions of a common form. This is also supported by the fact that Bjørn Jonsson (Torfæus 1715, p.86) argues that the Icelandic white-speckled raven should have come to the country on the drift-ice from Greenland ("cum glacie Grønlandica"), and therefore not breed on Iceland. But on Greenland they were also only occasionally seen (Winge 1898, p.269).


The intention of collecting and explaining this scattered information, is primarily a theoretical interest to get the genetics concerning the white-speckled raven clarified. Secondly, it is hoped that its history might create some interest, now that the bird is extinct.


Andersen, K. 1894 b: "Diomedea melanophrys, in the Faroe Islands".
Proceedings of the Royal Physical Society of Edinburgh, vol. XIII.


Crows of The World


PS!
Are you in possession of any litterature concerning the white-speckled raven?
Or litterature on other corvids?
Get it published on this site!
Please mail